The Wood of Cree is a Western acidic oak woodland which forms part of the Galloway Oakwoods Special Area of Conservation, Natura 2000 site and designated SSSI with features of Upland Oak Woodland and Oligotrophic lochs. It is the largest ancient coppice wood in southern Scotland providing specialised habitat for threatened migratory birds such as pied flycatchers, wood warblers, tree pipits, redstarts and cuckoos and for resident species such as willow tits and is run as an RSPB reserve.

It has a rich diversity of fauna including the rare Leisler’s bat, water vole, red squirrel and otter as well as unusual invertebrates, butterflies and moths including purple hairstreak, scotch argus, small pearl-bordered and dark green fritillary, grayling and beautiful snout moth.

It is largely comprised of native sessile oak, however, unlike other ancient oak woodlands like Carstramon Wood, Wood of Cree lacks the large veteran trees you would expect despite records of a forest dating back to the 13th Century. This is because around 140 yrs ago the wood was clear-felled; all the trees were cut down at the same time. As hundred year old oaks are not considered old, let alone ancient, this poses the question of how a status of ancient woodland can be applied?

The answer relies on a number of factors associated with traditional methods of wood management since around the 17th century. The steepness of woodland meant that trees were not left to mature specifically for timber. Instead certain trees were coppiced for uses such as building, fencing, charcoal production and fuel. The Wood of Cree was probably coppiced for centuries and any larger trees last felled around 1875, with regrowth coppiced until 1920 and then left without management. As the earth was not disturbed by replanting the existing ground flora remained intact, maintaining it’s ancient character. Without competition from sapling crop forestry, the oaks managed to regenerate from the original ancient rootstock. This has resulted in multiple trunked trees rather than the large specimens we would expect.

This uniformity of age gives the wood a unique vertical character, dense with tall thin trunks. The now century-old regeneration is still immature in terms of oak lifespan and consequently there are few gaps from fallen trees where new saplings can form and create natural variety of age. 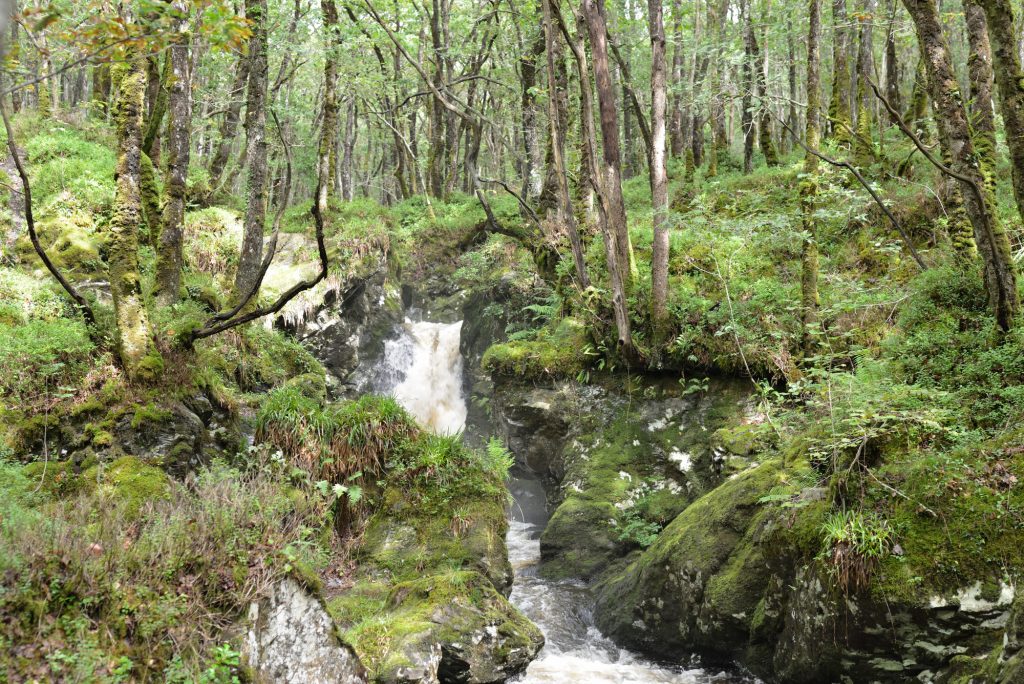 The character of the Wood of Cree is shaped by two rivers that course through it, fed by mountain streams off Benailsa and Larg Hill and Loch Middle. The steep sided woodland paths follow Cordorcan burn and Pulhowan burn which flow into the River Cree. Spectacular waterfalls make dramatic scenery, rushing down through deeply cut channels. When the water levels are low, smoothed channels of overflow water are revealed higher up along the rock line. Fallen trees make living bridges across the water, suspended ledges for moss and ferns, sideshoots growing up like saplings along the trunk.

Steep wooded ravines with waterfalls, cascades and boulders are special habitats for bryophytes and lichens. The tree cover raises humidity and offers additional growing structures, and specialist species tolerate the variance of flow and occasional submergence. The constant spray from the rapids provides perfect conditions for rare species such as Wilson’s Filmy fern Hymenophyllum wilsonii, a tiny moss-like fern. 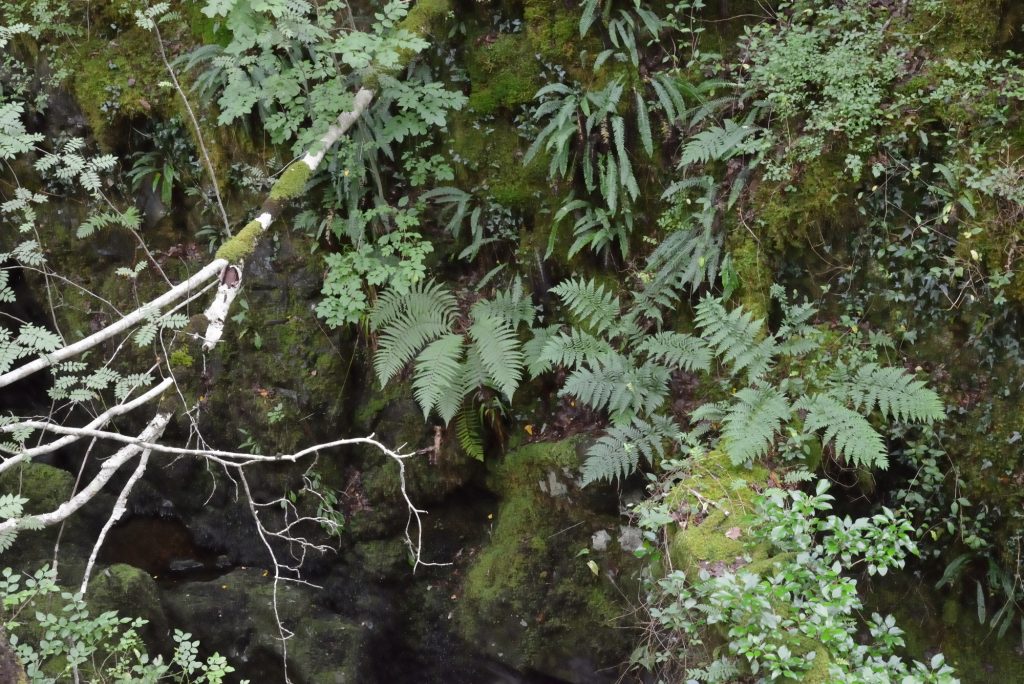 In Spring, the green is almost overwhelming, covering every surface from the froth of ground cover, up moss engulfed trunks, toward a sky obliterated by fresh oak leaves. The higher woodland is dominated by a moss ground flora; only the rock faces splashed by rushing water are bare. Hummocks protrude like anthills, perhaps covering once-upturned roots of fallen trees. Many different species are present, some climbing up sapling sticks like vertical exclamations, others growing in big beehive lumps high up on the sides of trees and more at their bases coiling around in thick whipped formations and continuing up making a covering of moss-bark with deep striations.

It is common to see the beautiful iridescent blue-black Dor beetle Geotrupidae in the woods, sometimes in swarms, and although mostly cited as being crepuscular or nocturnal, they are often visible during the day. These earth-boring scarab beetles excavate deep vertical burrows in the earth with horizontal chambers at the base which they fill with pockets of dung, leaf litter and decaying humus, moss or fungi for their larvae to feed from, laying a single egg in each before sealing it with soil. They play an important role in forest management in this way, enriching and aerating the soil as well as through removal and decomposition of dung and leaf litter. They are potentially a useful species for monitoring forest health and ecosystems. The larvae develop and pupate through the Summer, emerging in Autumn to feed before overwintering back in the chambers until Spring when they mate, hence two peak times of activity during the year. Identification of Dor beetles is intricate (see references) as species are similar, here the woodland Dor beetle Anoplotrupes stercorosus (sometimes named Geotrupes stercorosus) is more likely although the slightly longer-bodied Geotrupes stercorarius have been recorded at the Wood of Cree.

Where the acidic soil is poorer on outcrops and well-drained slopes, the ground flora is predominantly bilberry Vaccinium myrtillus and common cow-wheat Melampyrum pratense, a hemi-parasitic annual plant that gains some of its nutrients from roots of nearby host plants, in the Wood of Cree, these are likely to be oak roots. Cow-wheat is an indicator of ancient woodland, as it is a myrmecochorous annual – its seeds are dispersed locally by ants foraging close to their nest. They transport the seeds to feed their larvae with the nutrient-dense elaisomes, attached to the seed, then discard the seed into underground middens where they germinate in Winter, developing roots. In Spring, if the roots have attached well to a host, rapid growth develops above the surface, allowing the plant to flower early. The attachment to tree roots allows the plant to survive on very poor soil and in drought, as they are not reliant on soil moisture.

In the wetter lower parts of the wood, hundreds of years of decaying wood and leaves has resulted in nutrient rich earth containing mycorrhizal fungi which has a symbiotic relationship with English Bluebells (Hyacinthoides non-scripta). Bluebells protect themselves from frost and disturbance by drawing deeper into the soil with contractile roots. However this takes them further from the leaf litter where they cannot maintain growth. Arbuscular mycorrhiza in the soil penetrates the bluebell roots, increasing the rooting zone and providing the bluebells with nutrients such as phosphorous. In return the fungi accesses carbohydrates from the bluebells, produced through photosynthesis. Other ground flora in these lower woods are wood sorrel and honeysuckle.

Another indicator of ancient woodland found in the Wood of Cree is the Ash-black slug Limax cinereoniger, a large black and white gastropod which feeds on lichen, algae and fungus.

The water makes its way down, eventually feeding into the River Cree where there is an otter viewing platform overlooking the river. The base of the forest is richer and wetter, with slightly different flora and habitat conditions, another BAP Priority Habitat – Wet Woods. These may be may be constantly wet or seasonally flooded, in this case riparian woods situated along the river floodplain. Wet Woods offer a transient stage between open wetland areas and drier woodland, ideally suited to species such as bats.

The wetland floodplain Fen Habitat at the Wood of Cree is an important site for transition between freshwater and bog conditions, one of the best examples of hydroseral bog/fen development in Scotland. The oligotrophic lily pools of Dow Lochs are nutrient poor and acidic, with different biodiversity within and around them. These transitional zones from open water with floating mat vegetation to forested swamp to willow and alder carr can be both groundwater fed and periodically inundated from the main channel of the River Cree, potentially accumulating nutrients flushed from higher forest and flood silt. This wetland habitat has an abundance of species such as the nationally scarce Elongated Sedge Carex elongata and reed beetle Plateumaris rustica which feeds on carex, reed bunting, sedge warbler, teal, goldeneye, water rail, goosander and whooper swan as well as amphibians and dragonflies.

The Wood of Cree has an impressive range of priority habitats and associated biodiversity. It’s most recent addition to the reserve is Barclye Moor, a large extension with rough grazing and moorland adjoining the woodland. In partnership with the Cree Valley Community Trust and Scottish Forest Alliance the RSPB have been linking remaining native woodland fragments to create a corridor along the Cree valley planting native trees and maintaining and improving woodland pasture and wet grassland. It is a good area for snipe, barn owls and grasshopper warblers.