July in South Scotland tends to be warm and wet, drenching trees in much needed water and filling the waterways with powerful flow. Sunshine brings intense heat and high humidity. Insects become well visible and audible, with wasps, bees and hover flies buzzing and adorning flowering plants and numerous grasshoppers stridulating in the long meadow grass. Day-flying Forester moths (Adscita statices) feed on clover; their dusty iridescent turquoise wings delicately patterned from above and the same pale brown underneath as their hindwings. Their vivid blue bodies are brilliant blue-green, made more intense because of the shiny surface, with matching long antennae darkening to black on the feathered tips. Interestingly the colour of these moths is dependant on humidity level; in the morning and evening they turn a rusty red. (For images see link at end).

A few weeks ago, I noticed a hole in the ground at the base of a hedge with many wasps emerging and entering. The following day a large excavation had been scraped out, presumably by a badger looking for grubs during the night. Protected in part by large stones and hedge roots, the nest was still clearly visible between the hedge roots, with many wasps still there, re-constructing. After a couple of days, the paper wall was back intact with an entrance hole to the inside, and a few very docile wasps working away. Although wasps have a reputation for being aggressive if threatened or disturbed, these showed no interest in me which allowed the opportunity observe them quite closely. (Certain types of wasp can sting and swarm, so I would not recommend photographing them unless you have studied how to do so safely). In the first video you can see a much larger queen compared to the others.

As a crescendo to the insect month, the last day of July has been the first day of the flying ant season here. Whilst they can be  somewhat intrusive, I am always excited to see this spectacle, and spare a thought that soon after mating, the male ants will die. The winged alates, (both the larger new queens and smaller males) are much bigger than the un-winged worker ants of the same species that we usually see in the garden. Triggered by specific biological timing and weather conditions – usually hot summer days after rain, all the nests in an area commence their nuptial flight simultaneously, minimising predator risk and increasing chances of genetic mixing. Large swarms around 50 miles wide can be seen from space and are sometimes picked up on meteorological radars. The new queens mate with a few males to increase the DNA variation and store the sperm in an abdominal organ called a spermatheca where it will be used for the duration of their lifetime, which could be over 15 years. Once they have mated they chew off their wings and look for a suitable nest site. Perhaps as few as a single princess will survive – even if she finds safety from predators and obstacles, she then needs to lay eggs and tend to them whilst she tries to avoid starvation. These first ants, called nanitics, set out to feed her. All worker ants are sterile females, hatched from fertilised eggs. Only when her colony has grown large enough, which may take years, will she start to lay unfertilised eggs which become males, and allow some female larvae to fully develop into new queens, filling the nest with aletes waiting to take their own flight. In the case of my swarm, the sunny intensity of the day was followed in the evening with a powerful short downpour, and I felt a wave of empathy as I watched bucketfuls of rain swipe the tiny winged bodies off the roof.

July is not just rich in insect life, small birds gather in mixed flocks, sweeping down to feed on the swathes of wildflower seed-heads in the fields, goldfinches and yellowhammers glinting as they lift up and resettle. Swallows skim across the grass near the stream, circling round and round – a dizzying delight to find yourself in the midst of the whirlpool.

Bees and hoverflies on herb

Newts, frogs and young toads are easy to spot moving about in damper areas by the stream. Reptiles make the most of the baking heat;  adders and lizards bask in the stone walls and the highlight of the month came when I lifted the tarp off a wood chip pile to discover slow-worms in residence, clearly they don’t mind being worked around and are happy warming up under there. Apparently they can eat around 50 slugs a day, so perhaps an incentive for gardeners to make a reptile friendly habitat. 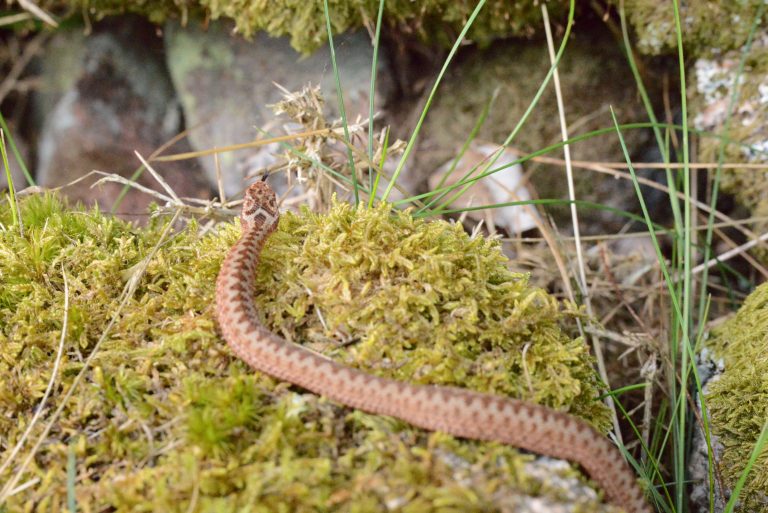 As late July fades towards August, the countryside enters a state of full untamed growth. Encroaching green-ness fills every space, tree branches hang low, reaching down to brush the  ripening seed heads beneath, ferns squeeze together along the water banks and wildflowers fill the meadows and drift down onto the coastal beaches.